PBO was originated in 1936 by the russian immigrant Evgeni Pavlovski.

The indigenous members of PBO were all immigrants from different layers of society who didn't have the very best conditions for a reasonable life in their new land. Their fortune was that Olga the Grand Dutchess of Russia and sister of the late Tzar Nikolaj II lived in the outer suburb of Copenhagen. She gave them land to grow their own crops, and upon that land they also build a little cottage and used it as a rehearsal room.

That same year, 1936, the orchestra performed for the first time in the Danish National Broadcast Radio - and many radio and TV performances were to come. (from the PBO homepage).

All through the years the orchestra has been a living dynamic organism of immigrants, local danish musicians, friends, friend's friends and children. Families and professionals playing together through generations - sometimes smaller, sometimes larger ensembles. In the course of time 164 people drafted through the orchestra. 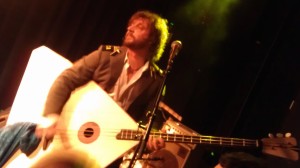